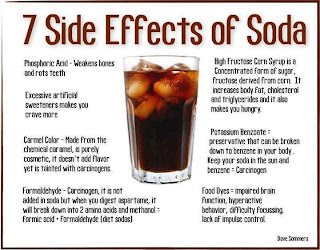 To be honest, one of the reasons I started this blog was to expound upon my Facebook rants.  Today I got my blog idea before I even finished my coffee.  And yes, it all started with the above stated photo.

Here we have just enough big scientific words and just enough correct information to make this sound like wise, shareable, information.  But let's look again and examine the claims one by one shall we?

1) Phosphoric Acid - Weakens Bones and rots teeth. Phosphoric acid is not only found in sodas, it's also found in meat, milk, nuts, egg yolks, poultry, and fish.  In other words, things that we as humans would normally consume to get protein would cause us to intake phosphoric acid.  We certainly don't need to stop eating protein.   Can taking in an EXCESSIVE amount of phosphorus cause dental erosion and weakened bones?  Since the normal way to get rid of excessive phosphorus is to bind with calcium, most likely.  I do have a friend (Warning, anecdote alert!) who is on a low carb diet and eats animal protein at every meal, and when he started drinking 3 or four diet sodas a day (they were tasty!) he notice cramping and joint pain.  Since the diet sodas were the only change in his diet, he read more about them and concluded that it was excessive phosphorus that caused the problem.  So, here was a person who was probably already getting his daily dose of phosphorus, and his excessive consumption of diet soda may have pushed him over the edge.  A lot of people also point out that phosphoric acid is used as an industrial cleaners.  Sure it is, just like hydrochloric acid is also used, but we also need hydrochloric acid in our stomachs to digest our food!
Take away message--Phosphoric acid by itself is not a bad thing.  Is one diet soda a day excessive?  Probably not.  Is drinking more than one or two a day excessive?  Most likely, especially if you eat animal protein.
SkepticRD rant--Too much of anything can throw your body out of balance.  Making blanket statements about chemicals that naturally occur in foods that humans need to consume is bad science.

2)  Excessive artificial sweeteners cause you to crave more.  More what?  Sodas?  Broccoli?  Sex?  Ok, maybe the photo person was just trying to use up limited space, but I couldn't resist poking a little fun.  He might be on to something here, especially in rats.  Also, keep in mind that our brains have evolve to recognize a sweet taste as a signal that a quick source of energy (i.e. glucose) is on it's way, so it is possible that the sweet taste may confuse the complex interplay between our brain, stomach, hormones, etc.  There is also a placebo effect at work here; you might feel less hungry after giving up diet sodas because you believed you would.
Take away message--Is one or two diet sodas per day excessive?  Probably not.  If the placebo effect is working for you, go for it.
Skeptic RD rant--But seriously, why are you paying all that money for something that provides no nutritional value?  Coffee and tea can provide anti-oxidants.  Water is much cheaper.  If you must have bubbly, do mineral water with a squeeze of lemon or lime.

3) Caramel color, made from the chemical caramel, is purely cosmetic, it doesn't add flavor yet is tainted with carcinogens.  Ok, I'm going to be the Grammar Police again.  There is no chemical named caramel.  What they probably meant was that caramel coloring is manufactured by heating carbohydrates, either alone or in the presence of acids, alkalies, and/or salts.  Is it tainted with "known carcinogens?" Probably in the same way that an apple has "known poisons" in it's apple seeds--yes there is something there but the dose determines a poison.  Apparently you have to consume 1000 cans of soda per day to get a carcinogenic amount, particularly if you are a lab rat.
Also, the fights over caramel coloring are happening between two groups with know bias--The American Beverage Association and the Center for Science in the Public Interest.  Remember my post on confirmation bias?
Take away message--Obviously one or two sodas per day is pretty far away from 1000 per day.
SkepticRD rant--Too much of anything can throw your body out of balance.  Those of us in the USA love to consume to excess, but 1000 cans or more of soda a day is excessive even for us. (Link)

4) Formaldehyde--carcinogen, it is not added in soda but when you digest aspartame, it will break down into two amino acids and methanol = formic acid + formaldehyde (diet sodas).  One of SkepticRD's hero's, Dr. Harriet Hall has already answered that "Some of the things we ingest are directly absorbed and utilized unchanged, like water. But most of what we ingest is metabolized.  Aspartame is metabolized. It does indeed break down into aspartic acid, phenylalanine, and methanol.  Aspartic acid and phenylalanine are amino acids that we need to survive. Methanol is produced in small amounts by the metabolism of many foods; it is harmless in small amounts. A cup of tomato juice produces six times as much methanol as a cup of diet soda. Methanol is completely metabolized via formaldehyde to formic acid; no formaldehyde remains. Lastly, the formic acid is broken down into water and carbon dioxide. Human studies show that formic acid is eliminated faster than it is formed after ingestion of aspartic acid.  So yes, those compounds appear, but so what?  We get much larger amounts of the same compounds from our food, and they don’t hurt us."
Take away message--The last two sentences in that quote say it all.
SkepticRD rant--Why do people have to take a normal body process and make it into something scary?  Why can't we educate people on how fascinating our body is--that it can take a tomato and break it down into things we need and things we don't?

5) High Fructose Corn Syrup is a concentrated form of sugar derived from corn.  It increases body fat, cholesterol, and triglycerides and it also makes you hungry.  Here is where we are finally on to something, although the main problem here is that HFCS has made sodas a cheap and easy source of extra sugar in our diets.  There is a tendency to store excess calories from sugar (or any form of carbohydrate) in the abdominal area which might lead to your body becoming more resistant to the hormone insulin (which regulates blood glucose levels, among other things).  If you are resistant to insulin, then your body will produce higher levels whenever you ingest a nice load of carbohydrate from soda, fruit juice, eating half a flat of strawberries, beer, eating a doughnut, etc.  The elevated levels of insulin do kick off another fascinating body process that causes our liver to kick out excess cholesterol and triglycerides.  Also, insulin does play a large role in appetite regulation so people with elevated levels do tend to have trouble with appetite control.
Take away message--Excess sugar in any form can cause the above stated problems.  Sodas make it very convenient to get sugar we don't need, as do fruit juices (do not get me started on fruit juices!)
SkepticRD rant--I will actually ask forgiveness here for having to condense a complicated body process into a paragraph.  Looks like I have material for another blog post.

6) Potassium Benzoate = preservative that can be broken down to benzene in the body.  Keep your soda in the sun and benzene = carcinogen.  Once again we may be on to something, but the breaking down usually happens in the soda itself, not the body.  This preservative works well in an acidic environment so it is usually combined with ascorbic acid (commonly known by the less scary sounding name vitamin C), but the combination of the two can produce benzene.  Once again, we are back to a "dose produces the poison" type thing, but information on doses is hard to come by.
Take away message--The "I don't know" part might be enough to scare people off here.
SkepticRD rant--Sketchy science is not always a good reason to avoid things.

7) Food Dyes = impaired brain function, hyperactive behavior, difficulty focusing, lack of impulse control. I am assuming that the creator of this photo is talking about the studies that were done on children with Attention Deficit Hyperactivity Disorder (ADHD).  Possibly about the diet developed by pediatrician Benjamin Feingold back in the 1970's.  First of all, the studies were done on children with a known diagnosis of ADHD, and the results of eliminating food dyes have been mixed and not enough to give conclusive evidence.  There is also no evidence that the food dyes can cause these problems in children who don't have a known diagnosis of ADHD, and would the results yield the same in adults?  We don't know.
Take away message--Don't make a choice where there isn't evidence to support your choice, and beware of studies done on specific populations.
SkepticRD rant--Parents who have kids who have learning difficulties are easy prey for "food woo" and we need to be extra supportive of promoting evidence based treatment. (Link)

As you can see above there is strong evidence to avoid regular sodas altogether listed IN ONE POINT out of the seven.  For avoiding diet sodas, there is evidence for avoiding drinking more than one or two a day, but I would say the financial reason is a stronger reason there.   Unfortunately my one reason (s) don't sound as good as the seven, but as a Skeptic I choose to make my choices based on good science, not a group of inflammatory statements.
Posted by SkepticRD at 4:55 AM

SkepticRD
I'm a Registered Dietitian and Certified Diabetes Educator who needs an outlet to talk about the lack of scientific literacy when it comes to nutrition. .